The Brisk Effect: Transforming the Landscape of Independent Education

The Brisk Effect: Transforming the Landscape of Independent Education

This story originally appeared in the spring 2019 issue of The Jag magazine. 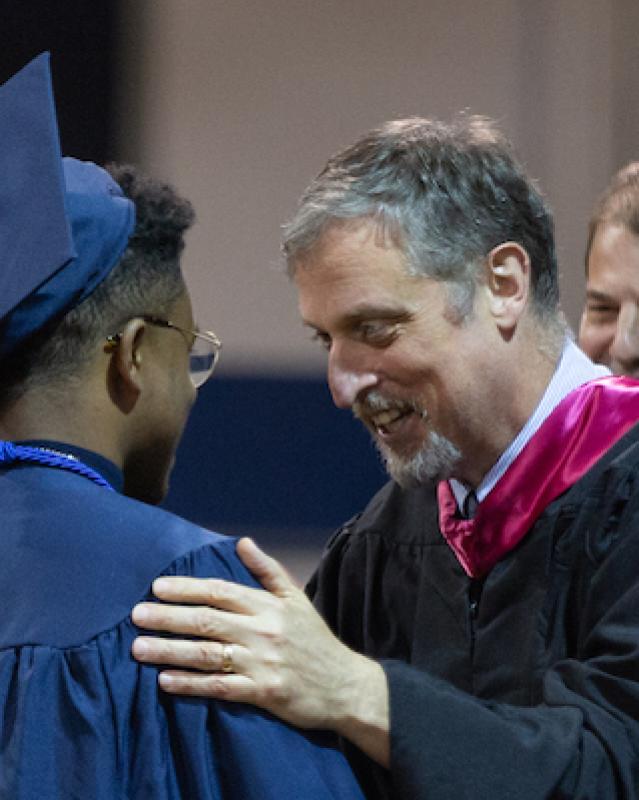 It is impossible to leave a conversation with Wellington Head of School Robert Brisk P ’13 ’15 without learning something new. It could be the lyrics to an obscure mid-century Broadway musical or the name of the father of modern French cuisine (Auguste Escoffier, for the Google challenged); he will not allow you to walk away a philistine. He also deeply appreciates learning something new himself and is quick to show his delight in acquiring a fun fact. His endless pursuit of knowledge makes it hard to believe that Brisk once eschewed the academic life and may have spent his life in any number of professions had it not been for an early morning call during his senior year at Princeton University.

The head of the language department at the Dwight-Englewood School in New Jersey hoped that Brisk’s youthful enthusiasm could bring new life to their lackluster Latin program. An initial reluctance was quickly overcome by a deep sense of loyalty Brisk felt for his alma mater. Still, he had plans to teach for only a short time. But when Brisk was asked to become head of upper school, he stayed at Dwight- Englewood for another 12 years, where he went on to create the Senior Focus Program, involving extensive student independent research on a topic of personal interest that culminates in a formal presentation of their work. The school later received an NAIS Innovation Award for its dedication to independent student research.

“My experience in independent schools has been about discovering the potential of the human brain when it has no limits. How to provide the right circumstances for children to fully realize the power of their brains well beyond the walls of the classroom,” Brisk explains in his office one spring afternoon, just a few months before he is to leave his role as head of school. Surrounded by books, papers strewn about with ideation illustrations for upcoming projects, and various mementos, from hockey jerseys to science award banners, given to him to by former students, nearly every square inch of his workspace is dedicated to the thoughtful examination of where education currently stands and how it can be pushed to continually evolve.

Years ago, when the opportunity arose for Brisk to leave New Jersey and explore a far different region of the country, he and his young family, including sons Billy ’13 and Ben ’15 with wife Monica Mahoney, moved to the Pacific Northwest for the Oregon Episcopal School in Portland, where he rose through the administration from head of upper school to associate head before he receiving another call that would change his life. The Wellington School in Columbus, Ohio, had reached a crossroads in its development and was looking for a head that could match their ambition.

The search for such a person was led by then board chair Larry Abbott P ’92 ’00 ’03 and future chair Nancy Kramer P ’07 ’09 ’11. Abbott was immediately impressed by Brisk’s talent as a speaker and also his sense of humor. The admiration was mutual. Brisk appreciated the fact that the school founders did not want to create just another cookie cutter educational experience in central Ohio. The entrepreneurial and innovative ethos at the heart of Wellington instantly drew him in. “In both of my previous schools,” Brisk said, “they were a century old until we refreshed them. To go to a school that didn’t have a long history of traditionalism was very exciting.”

Officially beginning his role as head of school at Wellington in the fall of 2007, Brisk was determined to follow the path the school founders had laid forth by breaking the mold of the establishment model of education.

“Rob’s significant independent school background gave him a keen perspective on what needed to be changed and what traditions were worth keeping,” Board Chair Ted Manley P ’21 ’24 recalls. “His native intelligence and education provided a gravitas that was needed at the time, but his generous personality, sharp sense of humor and infectious curiosity made him relatable to a community that was eager to listen, learn and grow.

“Rob is, first and foremost, a teacher, inspires learning, not just with his students, but with his staff and members of the board. Rob encourages risk-taking for the sake of learning, even if that may appear, at first, a bit messy. It is said that Wellington is a ‘safe place to fail’, which acknowledges that the best learning often takes place while recovering from a setback. Allowing risks and resets is at the heart of the Wellington ethos and Rob has certainly inspired fearless learning throughout Brisk did have one rather sizable challenge to face when he first arrived. In 2007, Wellington was in the middle of a major capital campaign to build what is now our upper school, lower school, dining room, and learning center. Fundraising is never an easy task, but this effort was made all the more complicated by the timing when the entire country was thrown into a deep recession in 2008. Brisk’s finesse under great pressure stood out to Abbott. “Rob turned out to be a very quick study and did an outstanding job in helping both with the finances of the campaign and the finances of the school. It was a very tough but also rewarding project.”

While navigating the endlessly complicated landscape of the capital campaign, Brisk never lost sight of his curricular aspirations for the school. The seed of his idea for student autonomy grew in a community eager to see their children flourish not just as students as but also people. In addition to establishing the Senior Focus Program as well as other student-led independent research opportunities, Brisk made innovative curriculum the center of Wellington’s identity. His vision was to be able to take the same energy, pride, and spirit other schools might have for athletic events and channel it into academics. The concept for All Things Wellington came to light very quickly with the event debuting in the winter of 2008 before a small group of parents with a handful of faculty presenting big ideas for the future of the school. Each year, the program continues to grow but the purpose remains true to highlighting the dreams, some achieved and some still works in progress, of faculty and students collaborating together, inspiring each other to do better each day.

Much of what is presented at All Things Wellington is made possible through the generous support of student engagement grants, another program Brisk introduced to foster and incentivize out-of-the-box thinking from faculty. The grants have encouraged teachers to stretch themselves and their students in fascinating new directions for the benefit of the entire learning community.

From his first introduction to Wellington, Brisk appreciated the freedom the board of trustees gave him in leading the school. He looks back on his time working with three board chairs, Larry Abbott, Nancy Kramer, and Ted Manley, as extraordinarily rewarding partnerships that ultimately made Wellington successful in achieving its goals. He extended that same sense of trust and validation in the faculty and administration he led. He is particularly proud of his efforts to increase diversity in all roles within the school community, and the professional development of his colleagues has benefited countless faculty members, perhaps none more than incoming head of school Dr. Jeff Terwin.

“I am very grateful to the outstanding mentorship I have received from Rob,” Terwin says. “In my work as a division head, Rob has been available to offer valuable perspective, drawing from his many years as an upper school head. Once he learned that I was interested in expanding my leadership, he encouraged me to become more involved with the board of trustees, and my experience on committees, most notably the finance committee, have positioned me to have a much better understanding of the complicated dynamics behind the proper management of the school. At his core, Rob has always valued new ideas, and I appreciate that he also has offered me plenty of autonomy to refine programs or build new initiatives. I have been able to thrive under that style of leadership and I am sure I will continue to lean on Rob for valuable advice and guidance.”

In return, Brisk is looking forward to the exciting new direction Terwin will take the school. “I think Jeff is going to do a fabulous job extending Wellington to a level I could have never imagined.”

What has driven Brisk during his entire 39 year career in education has always been the feeling that children were capable of so much more than mere rote memorization for the purpose of standardized testing. His bold conviction to expect more and therefore achieve more has informed his decision to take independent education in entirely new directions. Considering his desire to help children see education far beyond the walls of the classroom led him to the concept of student engagement and the importance of quantitative data that could then inform pedagogy, from learning environments to faculty discourse, to provide optimal classroom experiences in which students are challenged but also love it. The Wellington Engagement Index, a tool for measuring whether students feel a particular class is boring, entertaining, a total grind, or a place of pure intellectual bliss, could be considered Brisk’s very own capstone project after nearly four decades as an educator. It is also his next professional endeavor after leaving his role as head of school.

Kramer, a visionary herself, is optimistic for Brisk’s next venture. “I believe that Rob is just at the beginning of his contribution to the changing landscape of independent education,” she says. “The fact that he is taking the leap into entrepreneurship with The Wellington Initiative is a testament of his strong belief that there must be a better way to teach and a better way to measure. I think we will look back at this leap ten years from now and realize we were just scratching the surface.”

Reflecting on his time at Wellington, Brisk readily credits his wife Monica for always making the best choices for their family, including the decision that Wellington was the right place for them. “To have a person who is entirely on your side but also has an analytical and rational perspective, while also being a great mother, is invaluable,” he said. Indeed, it was his own family that gave Brisk the added perspective of being a Wellington parent himself. Sons Ben and Billy remain close to many of their former teachers to this day, speaking to the school’s remarkably close knit community.

“We have worked hard throughout the history of Wellington to differentiate ourselves among the independent schools in Ohio,” Abbott says. “Rob has worked hard to support this effort so we are rigorous in our academic standards, but also approach learning in a different way. It should be fun and every student should feel a sense of accomplishment. Rob has done a tremendous job of instilling this within our Wellington community.”

After nearly 40 years and three schools in vastly different parts of the country, Brisk is preparing for what could be the greatest calling of his long career in education. As he takes the plunge from academic to entrepreneur, in a fascinating role reversal with Wellington’s founders, Brisk will have the benefit of an enormously supportive community behind him all the way. “I am happy that I have the chance to get to work with Rob in his new role,” Kramer says. “I learn something from Rob almost every time I meet with him. He is truly a joy and gift in my life, and the lives of many, many others as well.”