A Flair for Food

A Flair for Food

This story originally appeared in the spring/summer 2016 issue of The Jag magazine. 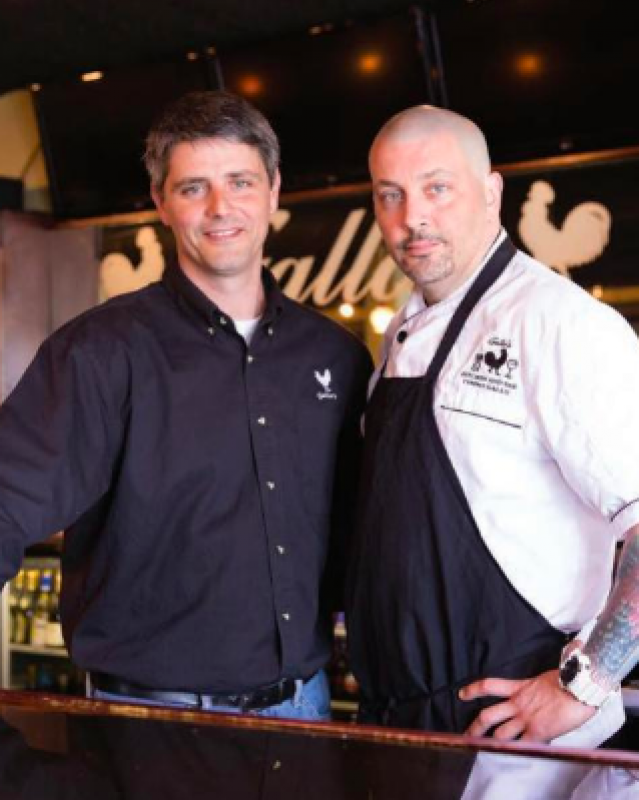 Named a secret foodie city by Forbes Travel Guide and “a certified food lovers’ town” by The Washington Post, Columbus has transformed its image as a mere pass through city in a flyover state to a legitimate major player in the culinary arts. At the heart of its recognition by critics and customers alike are the individual small-business owners drawn to the industry for its entrepreneurial spirit, artisanal integrity, and community building.

The Brothers Gallo
For Wellington alumni like Nick Gallo ’91, the strong sense of family and comradery he felt as a student led him on a career path in which he could feel a similar connection. Now as co-owners of three Columbus-area restaurants, Nick and his brother Tom Gallo ’93 are local favorites on the food scene. The Gallo family has a long tradition of running small businesses. Grandfather Nick Giantonio was a baker and father Bo started the O.P. Gallo Tuxedo shop. When the brothers left Columbus for college, they worked in restaurants as students at the University of Akron. They fell in love with the work and, despite first pursuing careers in law enforcement and the brokerage industry, felt compelled to
take a chance and open their own restaurant together, Gallo’s Tap Room, in 2004. The two easily fell into a yin and yang partnership in which Tom, having trained under famed Akron- based Chef Dave Russo (a mentee of Chef Emeril Lagasse), is responsible for the food side of the business while Nick watches over the front of the house. The brothers good- naturedly insist that their relationship has only ever been positive and supportive.

Twelve years after opening their first restaurant, the Gallos have three locations, including the much-loved Gallo’s in Upper Arlington and an additional Gallo’s Tap Room recently opened in Powell on Liberty Street. For Nick, the best part of running a business is having to answer only to himself. “If you can be your own boss in your hometown,” he said, “that’s the best. I feel deeply connected to Columbus and proud to provide a service to the people living here.”

This husband and father of three has found the secret to his success involves always putting his family first. Nick believes the best stress reliever at the end of a hard day is spending time with loved ones. For Tom, the work itself seems a creative outlet for a mind never at rest. He feels forever indebted to Wellington for helping him channel his high-energy intensity into positive pursuits. “I wasn’t the best student,” he admits, “but I was great at delivering speeches and presenting to an audience.”

Nowadays Tom uses his people skills to personally greet every patron of his restaurant and ask about their dining experience. The appreciative feedback he receives make all of the long hours and backbreaking work well worth it. He draws tremendous satisfaction from feeding people great food. The Gallos two most popular sauces are family recipes the brothers remember from growing up. “Every Sunday we sat down for dinner with my father’s sauce,” Tom says. “It’s comfort food to me.”

When questioned about advice for future Wellington graduates, Nick cautions against putting too much pressure on themselves to know exactly what they want to do in life right away. “It’s okay to figure it out as you go along,” he said. “Wellington will prepare you with a solid foundation to design any type of house you want to build.”

The Forbes Forge Ahead
When brothers James ’02 and Duncan ’04 Forbes were growing up they helped at their father Bill’s wine distribution company and learned firsthand the ins-and-outs of the restaurant supply business, selling to chefs as well as gourmet and grocery stores.

“They learned it through osmosis,” mother Jane said. “They were also exposed to good restaurants at home and on travels from an early age.”

Now the owners of North Country Charcuterie, a hand-made cured meats company in Columbus, James and Duncan also reflect on their time at Wellington as a crucial component to their success. The diverse curriculum helped them in different facets of taking on the herculean task of starting their own business. Today, Duncan considers his English and speech classes as well as roles in theatrical productions instrumental to his ability to effectively communicate to large and small audiences.

“My time in student council gave me confidence in navigating the politics of large institutions,” Duncan said. “Wellington math classes gave me the foundation needed for creating cost models, budgets, and financial projections.”

James’s role in the business has benefited the most from Wellington’s adaptive learning and chemistry classes. “There’s an incredible amount of science and chemistry behind cured meats,” he said. “We have to ferment and hit certain pH levels, deal with water activity in products, and regularly have our products tested by food scientists.”

Calling James’s work one part science and one part art, Jane appreciated Wellington’s encouragement for students to try new things. “The boys could be in the arts one minute and on the sports field the next,” she said. “They had a safe place to try and take a risk, even if it meant failure.”

James used that sense of fortitude in life as he gained valuable experience working in the restaurant industry before deciding to go to culinary school. While in the apprentice chef program at Columbus State, James was a member of the competition cooking team which won states and placed 4th in the region. All along, he had an interest in charcuterie that was further explored at Gallerie Bar & Bistro in the Short North. When the Forbes took a family trip to France, James immediately fell in love with all the charcuterie stores surrounding him. Having witnessed the growing interest in charcuterie in Columbus, James felt it was the perfect time in his professional life to open his own business. Jane felt a similar calling and the two decided to go for it.

The Forbes’s North County Charcuterie uses heritage breed pork from nearby farms and cures everything at The Commissary, an inspected, certified, commercial kitchen, and sources 95% of its ingredients from Ohio makers. Both brothers and Jane make all of the meats by hand themselves. With a demonstrated commitment to buying their ingredients locally, it is no surprise that Duncan’s favorite part of running the business is the warm reception from the Columbus community. For James, seeing a clear connection between the time and effort he puts into the company and what he gets back in return is the best possible reward.

Jane has a parent’s perspective. “I really like seeing my sons apply their unique talents and passions to the business. They have complementary skills and have found a way to work together and appreciate each other’s unique perspectives. That’s not an easy thing for siblings to do.”

With dad Bill also helping out with production, cleaning dishes, and tabling at the farmers market on a regular basis, separating family talk from business talk can be challenging. The Forbes put every bit as much effort into finding a healthy balance between work and family as they do building a solid company.

“Be prepared for long hours and no days off,” James said when asked about advice for Wellington’s future entrepreneurs.

Duncan thinks that those considering making the leap should go for it. “Remember that you have a lot of people, including friends, family, and community members, who will help you if things go wrong.”

Jane cut to the heart of the matter. “Be kind to your parents.”

Lesgold Goes Old World
Wellington graduate David Lesgold ’03 has also garnered local notoriety for his Columbus-based charcuterie businesses. The owner and operator of the artisan-meat business Salumi Couture, Lesgold is a specialty market wholesaler with the ability to customize charcuterie boards for parties and events or ship to anywhere in the world.

“I think a lot of my passion for charcuterie and preservation techniques started just from having the privilege of going out to eat with my family,” he said, “and being encouraged to try different things and ask lot of questions.” Lesgold also credits Wellington’s culturally diverse atmosphere for giving him a very early developed palette.

After earning a culinary arts degree from Madison College in Wisconsin and gaining further training through an internship at Underground Meats in Madison, Lesgold worked as a line cook for a few years before deciding to go into business for himself and devote his time to learning everything he could about the old world hands-on technique. “After reading lots of books and traveling the country tasting and asking questions,” he said, “I started to understand and really love the charcuterie board concept of big bold complimentary and contrasting flavors but in small portions.”

Undaunted by learning an entirely new skill, Lesgold has now mastered the process of curing meat. He begins with heritage pork, usually Duroc or Berkshire, and prepares it for grinding, mixing, stuffing, fermenting, and longterm curing. His five different salumes take about 4 to 6 weeks to finish. A whole muscle cut like Coppa can take about three months. Lesgold’s product can be found at popular Columbus establishments like The Refectory, Wolf’s Ridge Brewery, and Muirfield Village Golf Club.

An inquisitive nature and dedication to his hometown community sustain Lesgold as a small business owner. “Every little success is mine...every mistake is mine. Doing your own thing is extremely difficult, stressful, lonely, and expensive but life is just too short not to try and do something special with a unique skill if you have one and try to share it with the world. I believe that people are reverting back to small batch handmade products not simply because it’s trendy but because it’s the right way to live and enjoy the fruits of life. I came back to Columbus to help set a trend and be part of the slow foods renaissance, not just to be successful with my business. Sharing and teaching about charcuterie and preservation techniques is just as important to me and a true chef has a responsibility to share and pass their knowledge to others.”

In his free time Lesgold enjoys spending time hiking or relaxing with his Weimaraner Adrienne. He also likes watching the Blue Jackets, Buckeyes, and Green Bay Packers as well as listening to live music, especially blues and country. Never far from the kitchen, Lesgold cooks with his girlfriend Kisha and her son Lane. They also have fun with their new vizsla puppy, Sunny. Undoubtedly named after Lesgold’s future outlook.