This story originally appeared in the fall 2018 issue of The Jag Magazine. 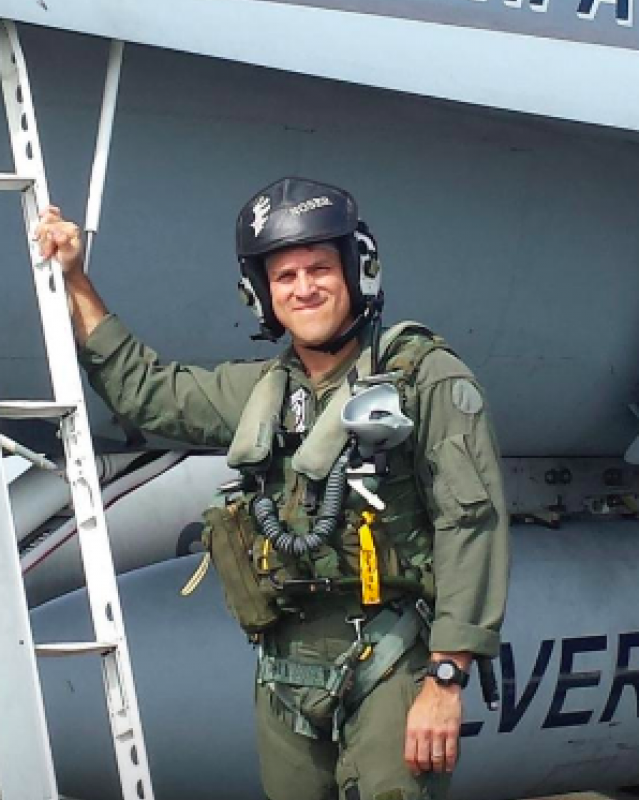 When asked to consider what makes a good leader, Lieutenant Colonel Shannon Brown ‘91 is contemplative and precise, perhaps the two most important qualities a fighter pilot in the United States Marine Corps can possess. With much thought and reflection, Brown very methodically explains the essentials of effective leadership. “Trust,” he begins with the assured but measured tone of someone speaking from personal experience. “Your subordinates have to trust you and that comes from credibility. You have to walk the walk and set an example all of the time.” In Brown’s mind, when there is trust the people you lead will do the right thing even when you’re not watching.

The second quality of a good leader, Brown says, is showing empathy. When commanding an entire squadron, he is fully cognizant of how very young his troops are and always keeps their perspective in mind. “If they feel understood and valued, that goes a long way.”

Feeling understood and valued were the foundation of Brown’s time as a student at Wellington. He and his brother Lyle ’89 were a part of the first classes to enter the school upon its opening in 1982, and Brown readily expresses his gratitude for a learning environment that embraced him unconditionally. He can still name the faculty members who most impacted his life, from Sam Stewart and John Yakscoe to Kathy Pinson and Robert Gibson, and can trace the lines of their influence through the path he has taken in life. When he formed the garage band “Rubber Glove” with friends Justin Holland ‘91 and Pete Waydo ‘91, it was band teacher Mr. Gibson who memorably gave them class credit for practicing during the school day. “He knew us so well and trusted us. I still play the bass today because of that experience.”

The opportunity to try new things at Wellington showed Brown just what he was capable of if he set his mind to it. The goals he set for himself as a student here and later Swarthmore College, where he majored in philosophy and religion, led the way to his career in military service.

It’s not surprising to learn vision is another quality Brown attributes to a good leader. It was his own vision for a life of service that fueled his drive to join the military. When the Gulf War began in 1990, his deep sense of patriotism compelled him to visit a recruiter while still in high school. Brown decided to join the Marine Corps during his junior year in college and has since distinguished himself with a remarkable career defending our country and leading others to do the same. He has served as an F/A-18 pilot in the operating forces and completed a tour as an instructor pilot with Marine Aviation Weapons and Tactics Squadron One. Brown also served two tours as a Fire Support Officer and Joint Terminal Attack Controller for a Joint Special Operations Task Force. In all, he has completed four deployments to the Western Pacific, one combat tour in Iraq, and four combat deployments to Afghanistan. “Any success I have had in my career is a direct reflection of the support and encouragement my wife, Sarah, has given me, including countless moves across the country, enduring long deployments, as well as helping other military families when their loved ones are away.”

Currently serving as the senior aide to the commandant of the Marine Corps, Brown considers the best part of his job to be the people. “They come from all different walks of life,” he says, “but each shares the same sense of purpose.”

Resolve is the final component of good leadership in Brown’s opinion. It is a quality that can be attributed not only to him, but also his parents Dale and Reggie for deciding to take a chance on a new independent school in Columbus and then committing to have both their sons graduate, making the hard choices and sacrifices necessary to achieving their goal. When Brown received the Wellington Distinguished Alumni Award in the spring of 2018, he spoke of the immense gratitude he felt for his parents and teachers.

“A lot of what I’ve been able to do in college and professionally are the result of opportunities I had at Wellington,” Brown says. “The education really teaches you to think critically and gives you the ability to look at a problem from a lot of different perspectives. The leadership opportunities I had as the team captain for multiple sports and participating in student council were invaluable. Wellington was unique in that the teachers truly cared for you. I have very fond memories of my time there. It is a remarkable place.”